We finally have a release date for the massive summer update we’ve been working on for months. This update will add a new non p2w TMD realm with weekly war events, a brand new TMD level system with many more prizes, a ton of awesome resource pack stuff, and much more! Let’s get into it-

TMD Inferno will be a new more competitive TMD realm, where we expect much of the pvp action on the network to now take place. There will be no pay to win elements (crates won’t be purchasable, all players will have the same kits, /heal and /repair are disabled, etc), so all players will be on equal footing. There will be weekly wars hosted at various parts of the map, where teams of up to 6 will compete for tons of prizes. Every set of 10 wars will make up a season, with top teams over the entire season earning even cooler prizes. Season 1 will start with the first war this Saturday (8/14) at 5PM EST, and will end October 16th.

How Will Wars Work?

Wars will occur at predetermined/preannounced locations and last 45 minutes. During wars, teams of up to 6 will fight for control of a central “control point” (pictured below). Teams will earn score for killing enemy players and for holding the point. The score breakdown will be as follows:
The control point can be claimed by standing in the outlined area for 10 seconds. If players from different teams are both in the area at once, the point goes into a “contested” state, where nobody is claiming it. If you are claiming the point and an enemy player enters the point then exits it, your claim progress from before they entered the point will remain. In order for the war to end, a team must hold the point uncontested for 10 seconds. The war will go into “overtime” after the 45 minutes are up if the team holding the point has not had control for the required 10 seconds.

TMD Inferno will have seasons, which will be made up of 10 wars each. Teams will get season points for their placements in wars, and the top teams at the end of each season will win exclusive prizes. Season 1 will start with the first war this Saturday (8/14) at 5PM EST, and will end October 16th. But don’t worry, items won’t be reset at the end of seasons - rather, a new season will start with inventories/bases/items/etc staying as they were.

Season points for team war placements are as follows:

These are the points teams get for placing in individual wars. The team with the most season points at the end of each season will get the seasonal prizes shown below. 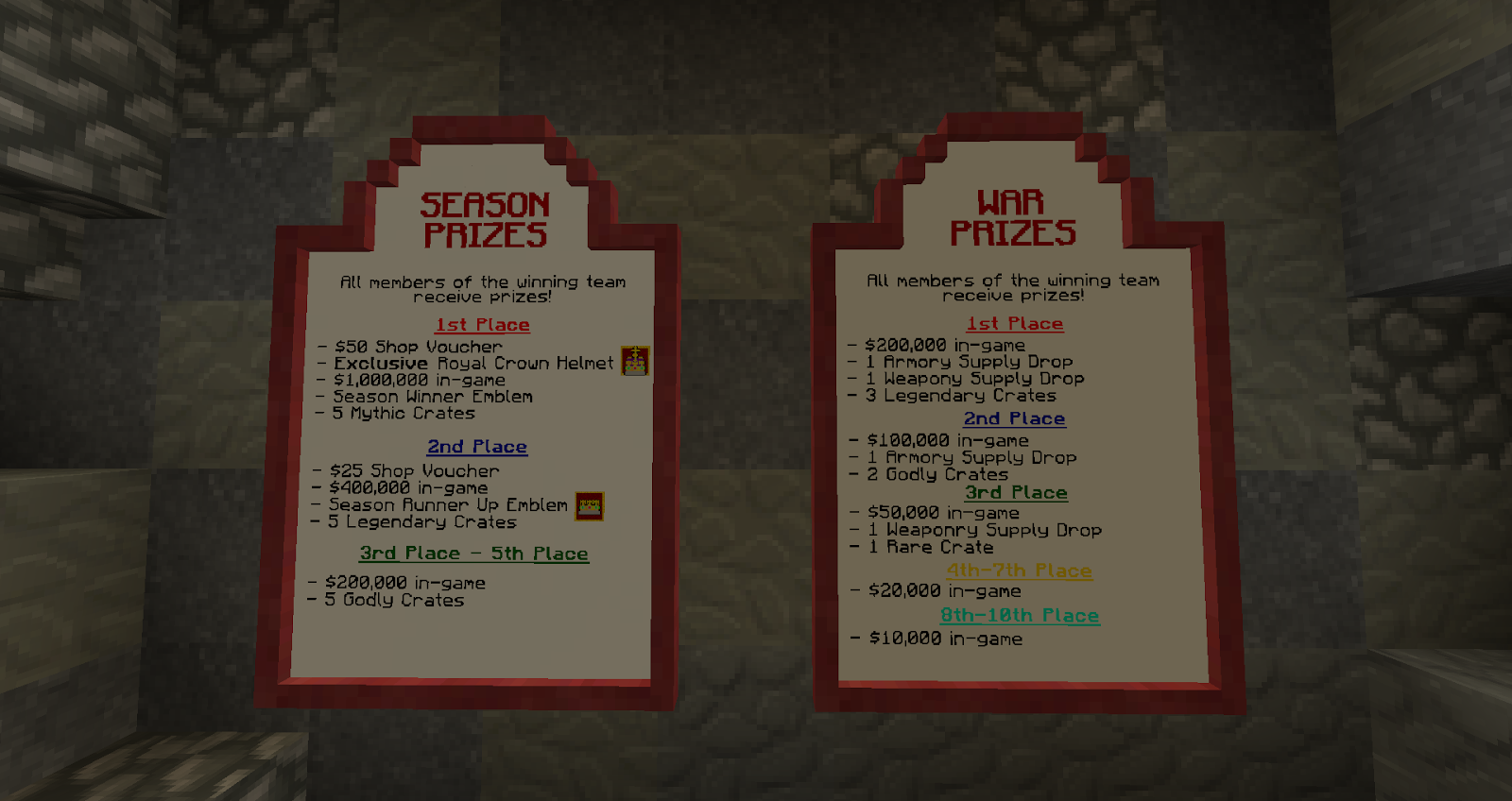 The Royal Crown, which will be the rarest item in the game - a soulbound helmet given at the end of Season 1 to each of the winning team’s members. 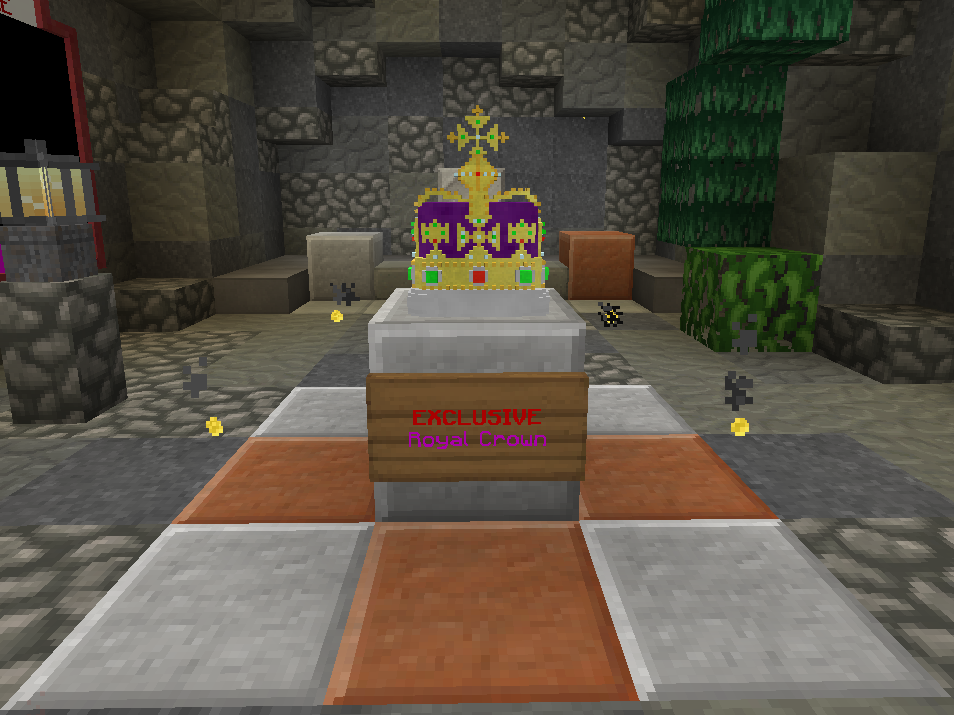 Over the last couple months, you may have noticed that our shop has had a lot of packages removed. We’ve been hard at work revamping it to be EULA compliant (not pay to win) - we’re removing various over the top pay to win mechanics that most players didn’t like anyways, and adding new packages that will be fun for everyone, and still worth purchasing.

We’ve completely revamped the Supply Drop system, and will now be selling Armory and Weaponry Supply Drops in the shop (You will also be able to get them by leveling up, and as a monthly bonus for ranked players).

Supply Drops will now have to be called in on platforms right outside of safezones, like the one pictured below. Each of the four safezones that can be teleported to have a supply drop location. 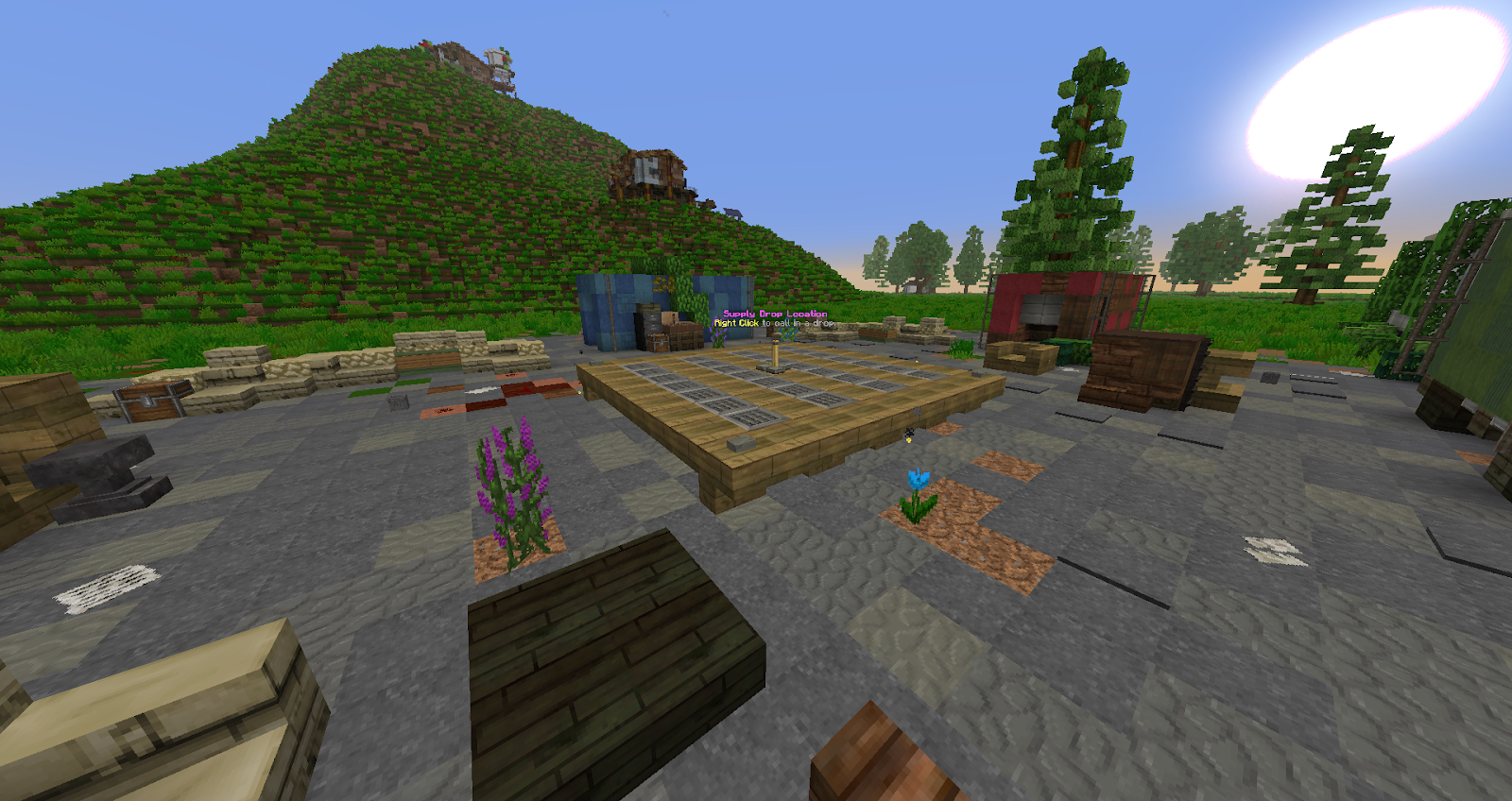 When a drop is called in, all online players will be notified via a message in chat. The drop will take 3 minutes to fall, giving players time to get to the safezone and fight for the contents of the drop. During this time, riot gear walkers will spawn near the drop platform. The screenshot below shows a preview of what this will look like. Once a supply drop lands, ~5 chests of items will appear at the drop site. These chests will have 3 items specific to the drop type (usually tier 4s and legendaries), as well as a lot of miscellaneous items like healing supplies. 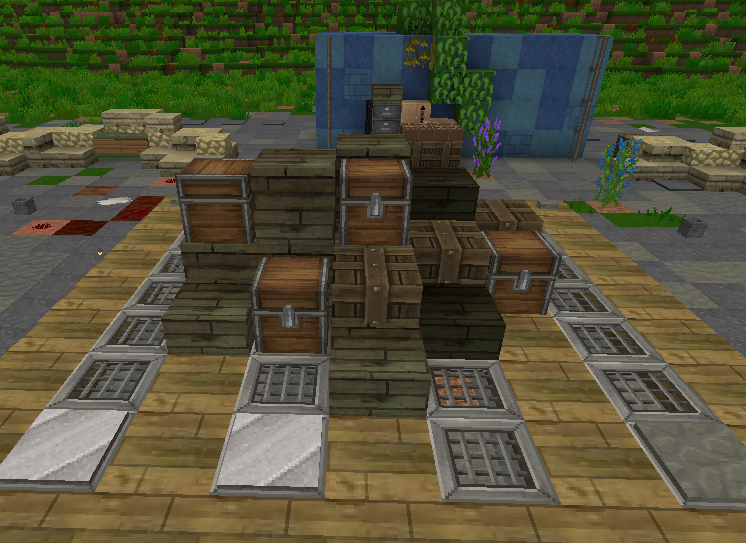 Note: You will no longer be able to get basic/elite/juggernaut supply drops by voting, though you can still call in any that you have.


Realm-Wide Money & EXP Boosters
Similar to CTA, players on TMD will now be able to buy Realm-Wide 2X Money and EXP boosters. These will be accessible via a new /boost command

Coins, Thanking System
We’ve added a new global currency to the network - coins. When players activate server-wide events like supply drops or activate boosters, other players will be able to click a message in chat to thank them. Doing so will give both the player being thanked and the player executing the command coins. Players will receive 10 coins for thanking others, while players who call in events will receive 200 coins for each of the first 5 “thanks” they receive, and 10 coins for every additional thanks.

Coin Shop
Players will be able to spend their coins on certain perks/cosmetics available in the coin shop (Accessible via /coin shop and an NPC at spawn on TMD). Each gamemode/server will have different items for sale. On TMD Inferno, players will only be able to use coins to purchase non gameplay affecting items like camo cases and a cosmetic grim reaper emblem. On the original 4 TMD realms, players will be able to purchase the aforementioned items, as well as one time kits and crates.

Crates
We will be re-adding crates to the shop, though they will only be purchasable on the original 4 TMD realms (Ragnarok, Armageddon, Wildfire, Hailstorm). To reiterate: TMD Inferno will have no pay to win elements.

Note: Many of these things (like supply drops) will be ported to CTA - be on the lookout for that.

Revamped TMD Level System
We have revamped the TMD level system to function more like the CTA and Mine Wars systems.

Doing /level will now bring up a GUI that looks like this:

Every level now comes with a reward. For a list of every level reward, see this spreadsheet:
https://docs.google.com/spreadsheets/d/1AZf0h1QnCJS5ykUQBJuOhWCMWk2DvL0IKmt6-bCzKxk/edit?usp=sharing

For this update to work well, we’ve decided to reset levels, as otherwise players would be able to claim a crazy amount of level rewards. We know how much players care about their current levels, so in order to honor everyone’s progress and allow them people to keep their bragging rights, we’ll be giving everybody emblems they can display in chat based on their levels with the current system - more on emblems later.

Resource Pack Updates & Emblems
With this update we’ve taken advantage of some cool Minecraft 1.15 features to display images in fonts.

We’ve also added an emblem system, where players can earn emblems for doing a variety of things like accruing stats, leveling up, etc. These emblems can be displayed by players in front of their name in chat with a new /emblems command. Hover over emblems in chat to get info on how they were earned, how rare they are, and how many people have them:

We’ve also done some Resource Pack stuff to brighten up the hub, with new portal displays: 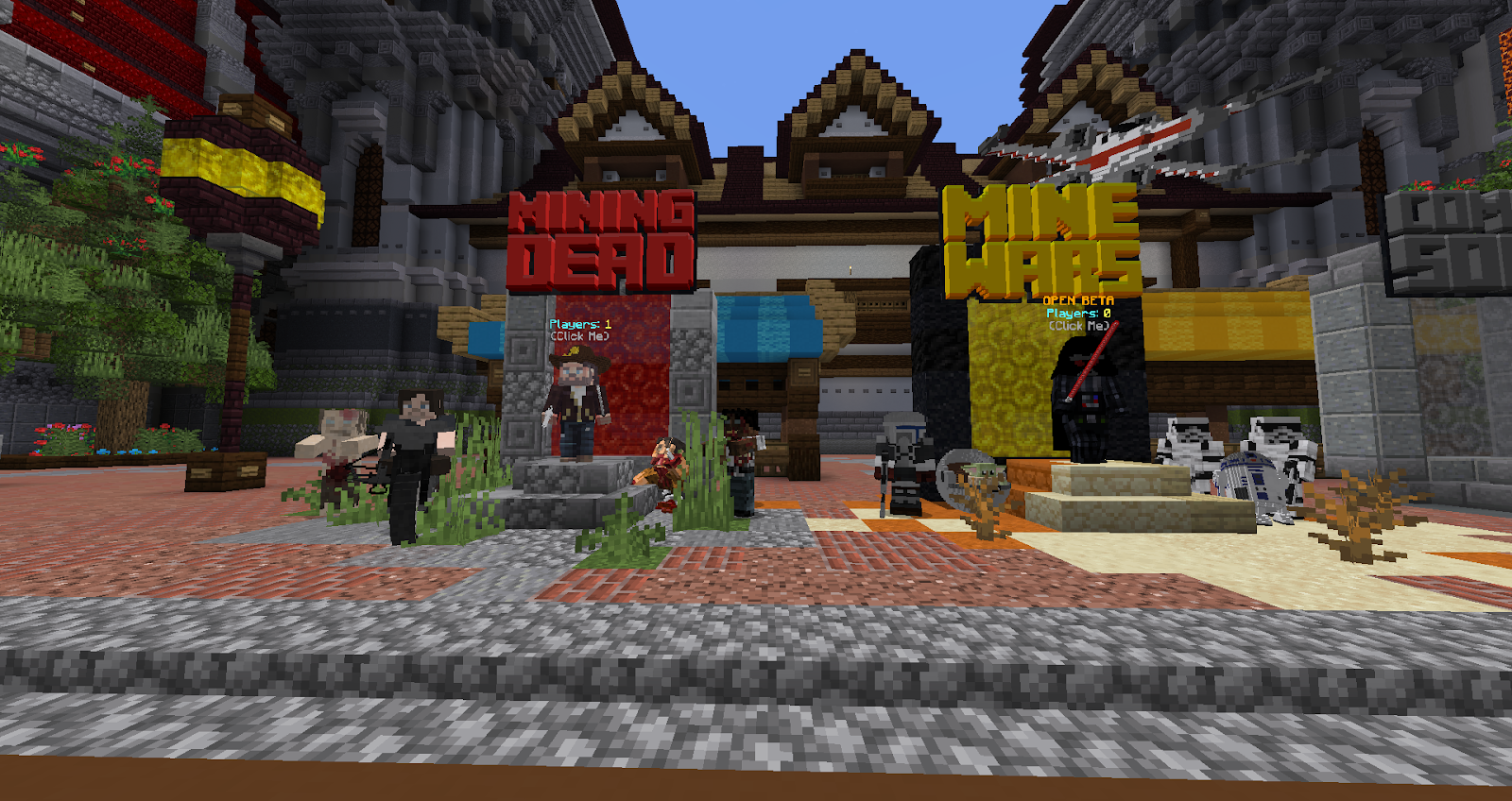 As well as TMD: Misc
In addition to the stated changes, this update includes a ton of bug fixes, a ton of tools for staff members, some pack changes on TMD, new scoreboards/tab lists, and a plethora of other changes and new things. This update is the culmination of thousands of man hours of work, spread out over about half a year, so it’s hard to condense everything into a single news post. Be sure to check it out ingame when it releases, as you’ll definitely run into a lot of new stuff not mentioned here!
You must log in or register to reply here.
Join at play.havoc.games
About Us
Formerly known as HavocMC, Havoc Games has been pushing the limits of vanilla minecraft since 2012.
Home of The Mining Dead, Mine Wars, and Craft Theft Auto.
Quick Links
Help Rules Jobs
Support Us
Payments support Havoc Games by paying for server costs, website costs, gamemode development, etc. Thank You! View Store
Copyright 2020 Havoc Games
Created by Benj